First United Church of Christ, Hellertown > News > From The Pastor's Pen > Ever hear the name Polycarp?

Ever hear the name Polycarp?

From The Pastor's Pen 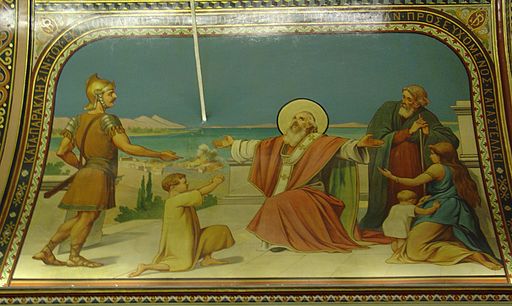 Polycarp is a name that is not familiar to most Christians, but he is one of the most important figures in the early history of Christianity. He is one of the Apostolic Church Fathers, which means he is believed to have been taught by one of the twelve original disciples of Jesus. In the case of Polycarp, he claimed to have met and spoken with several of the apostles and people who had met Jesus. Most notably, it is believed that Polycarp learned at the feet of John of Patmos, the man credited as the author of Revelation.

Polycarp was the bishop of Smyrna, which is now known as Izmir, Turkey. He was a very influential member of the early church. There is little doubt that he was a major force in putting together the group of books and letters we call the New Testament. He is also the author of one of the earliest surviving Christian manuscripts, Polycarp’s Letter to the Philippians. This letter is helpful to Christians because it gives us a snapshot of what New Testament texts were being used, distributed, and were well known by the earliest church. Polycarp was also hugely important because he was a driving force in stamping out heretical teachings and establishing orthodox Christian teaching. His age and experience allowed him to be an authoritative voice when conflict arose.

Polycarp was a long-lived man. We are far from certain exactly how old he was when he died, or even when he died, although it was sometime between 155 and 167 C.E. He was at least 86 years old when he died; this allowed Polycarp to be one of the only Christian teachers who could have survived long enough to have learned from the disciples and formed the organized early church. Despite his long life, Polycarp did not escape persecution. He was burned at the stake and stabbed for refusing to worship the Roman Emperor. His final words live on:

“Eighty and six years I have served Him, and He has done me no wrong. How then can I blaspheme my King and Savior? You threaten me with a fire that burns for a season, and after a little while is quenched; but you are ignorant of the fire of everlasting punishment that is prepared for the wicked. I bless you Father for judging me worthy of this hour, so that in the company of the martyrs I may share the cup of Christ.”

Polycarp lived a life that bore “much fruit”, which is what his name means. In February, our Christian sisters and brothers who venerate saints (Orthodox, Catholic, Episcopalian, Lutheran) remember Polycarp. He is known as the patron saint of earaches and dysentery because they are topics he preached about during his life. I hope none of you are afflicted by dysentery or earaches, but if you are, a good word about Polycarp couldn’t hurt.